The Sgt. David James Smith Memorial Fund was founded to provide support for our veterans and our local community in memory of our loved hero who gave all to protect our freedom. Proceeds from the fund support our Wounded Veterans, the established scholarships in David’s honor, and the needs of our local community. We are a 501(c)3, all run by volunteers, who are family and friends of David.

Thanks to our grateful and patriotic community, our fund has provided the following: 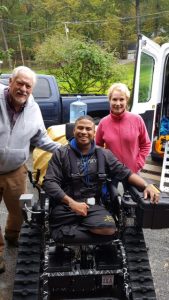 The 2016 recipient of the Offtrack Road Chair, Ryan Major.